Royal Ribbon Cutting of the Roads of Arabia Exhibition 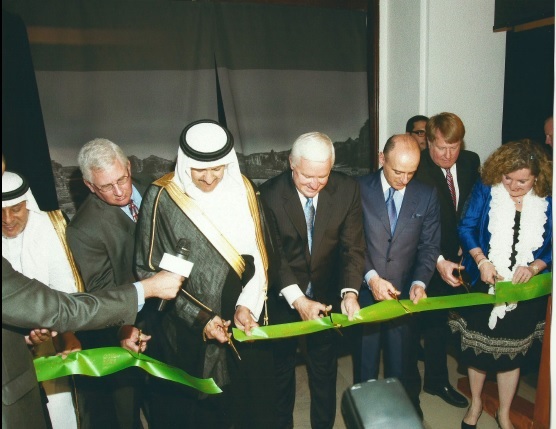 Curtis, the founder of one of America’s leading non-profit organizations aimed at strengthening business and educational ties to the Middle East, said Saturdays’ “Royal Grand Opening” of the Saudi Commission on Tourism & Antiquities’ Roads of Arabia exhibition, which traveled here from the Freer/Sackler Smithsonian, was “the kind of warm, gracious environment that allows for the best kind of bridge-building across cultures and oceans,” adding, “When 7,000 years of history from the Arabian Peninsula comes to town it has the power to bring an American governor, a Saudi prince and some of the greatest innovators from U.S. and Saudi business together for some really important dialogue.  Our institute exists to facilitate moments like this.”

American Middle East Institute joined the Carnegie Museum of Natural History in hosting a weekend gala headlined by His Royal Highness Prince Sultan bin Salman bin Abdulaziz; His Excellency Adel Al-Jubeir, Saudi Ambassador to the United States of America; and Governor of Pennsylvania Tom Corbett.   The leaders of Westinghouse and Saudi Aramco were among the over 200 invited business, educational and cultural leaders on hand for the event.

Prince Sultan joined Governor Corbett in praising AMEI for convening the gathering, urging the institute to organize a similar visit of American leaders on Saudi soil in the near future. In an interview with the Pittsburgh Post-Gazette the Saudi royal said, “I really see that we need more human connection. Culture is one of those fantastic bridges that can bring people together.”  “That’s what we hope to do here in Pittsburgh.”

The American Middle East Institute (AMEI) is an independent, non-profit organization, headquartered in Pittsburgh, Pennsylvania.  AMEI is focused on building business, educational and cultural ties between the United States and the countries of the Middle East.  We believe these kinds of ties represent a powerful form of diplomacy. For more information, visit www.AmericanMEI.org.